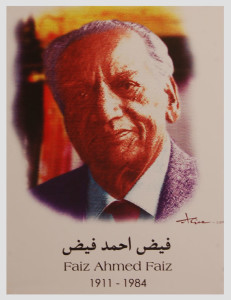 Faiz Ahmad Faiz (Punjabi, Urdu: فیض احمد فیض ‎, born 13 February 1911 – 20 November 1984), MBE, NI, Lenin Peace Prizewas an influential left-wing intellectual, revolutionary poet, and one of the most regarded poets of the Urdu language, being considered four times for the Nobel Prize in poetry. Faiz also wrote poetry in the Punjabi language. A notable member of theProgressive Writers’ Movement (PWM), Faiz was an avowed Marxist, for which he received the Lenin Peace Prize by theSoviet Union in 1962. He was repeatedly accused of atheism by the Pakistani political and military establishment.

Faiz was identified as an opponent of the Prime minister Liaquat Ali Khan’s government in the Rawalpindi conspiracy case, along with the left-wing military sponsor Major-General Akbar Khan. The Military police arrested Faiz as a result, held to trial by its JAG branch, and given a long sentence. These were commuted after the assassination of Liaquat Ali Khan in 1951.