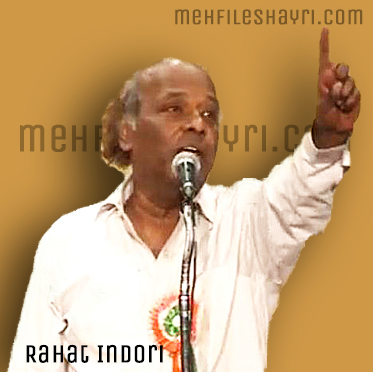 Rahat Indori  (born January 1, 1950) is an eminent Urdu language poet and a bollywood lyricist. Prior to this he was a pedagogist of Urdu literature at Indore University.

(Rahat Indori) He was born on January 1, 1950 in Indore to Rafatullah Qureshi, a cloth mill worker, and his wife Maqbool Un Nisa Begum. He was their fourth child.

He did his schooling from Nutan School Indore from where he completed his Higher Secondary.

He completed his graduation from Islamia Karimia College Indore in 1973 and has passed his MA in Urdu literature from Barkatullah University Bhopal (Madhya Pradesh) in 1975. Equally competent in prose and poetry,

Rahat was awarded a PhD in Urdu literature from the Bhoj University of Madhya Pradesh in 1985 for his thesis titled Urdu Main Mushaira.

He started teaching Urdu literature in IK College, Indore. According to his students he was the best lecturer in the college, he became very busy with Mushairas and started receiving invitations from all over India and abroad. He quickly became a well-known figure in the world of Urdu literature.

He was not only good at studies but was also the captain of the football and hockey team at school and college level. he recited his first sher in his college days when he was only 19. In those days his style of writing was surprising, advanced and had a freshness to it.

He tested positive for COVID-19 on 10 August 2020 and was admitted to Aurobindo Hospital in Indore, Madhya Pradesh, He died of cardiac arrest on 11 August 2020. via: wiki